Today I set out to experience the seemingly lost art that is Developing Film.

I wanted to try my hand at developing my own film to see if it is worth knowing. Lucky enough for us we have John, who knows a thing or two about the developing and processing of film. Coming from a background in fine arts photography he was taking the roll of grand master in our activity.

Now this isn’t to say that “film is dead”, certainly there is still a fun and amazing place for shooting on film in the digital age and plenty of people do it, but developing and processing is on the down. There are still photo labs open in some areas but are still steadily declining, and convenience stores may do some, but quality and care is always an issue there, luckily you can always send in your roll to one of many online services, where it can be processed and returned. I thought however “bleh! We’ll do it ourselves this time, how hard can it be?” 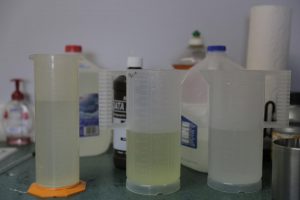 One of the surprisingly important parts was ensuring the temperature of all the liquids and chemicals was at a steady 70 degrees for optimal development. This was a tedious process of stirring and and heating until the temperature was stable.

Once the chemicals were prepped, he rolled his film onto one of the stainless steel reels and into the canister all inside of a changing bag. My initial thoughts here were “wow surely that was a lot harder than he made it out to be” *spoiler alert* this would soon be proven.

With the film secured into the canister the developer could now be administered. With the process now happening John had a timer set to 8 minutes (as dictated to him by a piece of paper), gently agitating the container every 30 seconds to ensure full coverage and few air bubbles.

With the developer done, he drains that and adds the stop bath. This is the chemical that, hence the name, stops the developer from over developing the negative. Much of the same process here, agitating and waiting. At this point I was getting restless and wanted to see the end product already.

The Fixer is the last thing to be run through the container which stabilizes the image and removes the rest of the leftovers. 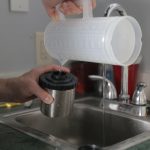 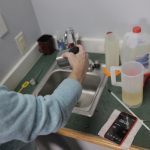 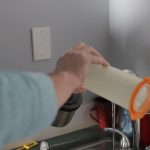 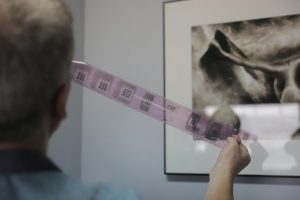 After what seemed like hours (actually about a 20 min process) we were finally able to see what had been shot. with everything looking good the film can be rinsed off and left to dry for eventual scanning. John’s roll of film had some nice looking shots that were processed quite clearly and should give good results.

Seeing that the process had worked so well here I was quite confident to go in with my roll and perfectly copy what John had done, with my zero experience in developing film. 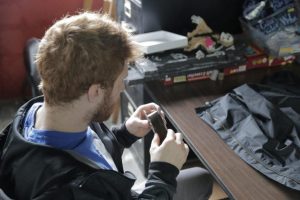 Now it was my turn.

After getting set up with a test roll to put on a reel, I learned very quickly how tedious that process actually was and that was with being able to see. Once I “got the hang” of that I dove into the changing bag and…. well… failed miserably.

So we took a new approach, I did mine in one of our back offices in the pitch black where I at least had room to work. Somehow this worked! I had my roll of film on the reel, and into the canister!

Using the process that John did before, I went through each of the chemicals, growing more impatient to see my photos. As the finals seconds tic’d on the fixer, I drained what was left in the canister and was able to pull the reel out to check on the status of my film.

….and the results were 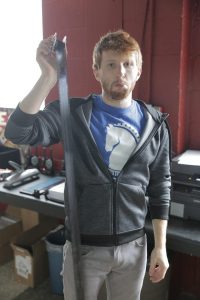 This, I was assured, wasn’t do to the developing process but in the picture taking process… which was still me.

So what is happening with the roll here is that about half of the shots were severely underexposed and a decent chuck at the end had been exposed to too much light at some point. (probably when I opened the back of the camera to see why it wasn’t rewinding) But that is a story for another day.

So despite being a little bummed that my roll was null and void, the process of developing film was… interesting. I am not going to brag about how great it is, because I wasn’t feeling a lot of that, it was more of “is it done yet?” While I was tad fascinated with the process and I do think it is an important part of photography to at least learn a little about, I will say that it is worth trying at least once. BUT it certainly made me say…

I’m glad we have digital

What are your thoughts on developing your own film? Fun? Tedious? Waste of time?

Who is Black Horse Videography? Find out more about us here.

We pride ourselves in creating lasting memories for our clients. Click here to read our reviews on Wedding Wire.

Like what you see or have additional questions? We’d love it if you dropped us a line.